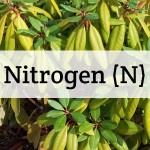 Nitrogen is one of the essential mineral nutrients that a plant requires for healthy growth. Nitrogen deficiencies are important to diagnose and fix.

If you plan to grow huge, potent plants, you need to understand the importance of nitrogen for plants.

It is taken up through a plant’s root system from its growing medium, in both soil and hydroponic growing systems. Organisms in soils oftentimes use up all nitrogen reserves.

This leaves minimal amounts of nitrogen for the plant, and it becomes necessary to supplement.

What Does Nitrogen Do For Plants?

Nitrogen can be found in all parts of the plant, including the roots, plant tissue, leaves, and grain.

In the leaves, nitrogen comprises part of the chlorophyll content, which is the “green” part of the stems and leaves. Without chlorophyll, a plant cannot transfer light energy into usable energy for the plant.

When it comes to the plant tissue, nitrogen is needed to help regulate plant development and growth. Nitrogen can also be stored in the fruit, grain, and seeds of a plant with protein. Finally, nitrogen is also found in the various enzymes and proteins of the roots.

Nitrogen helps your plants absorb the water it needs to stay healthy and to grow. The amount of nitrogen that a plant needs varies depending on the exact species as well as the stage of growth that the plant is in.

Why Nitrogen Is More Important During The Vegetative Stage

Nitrogen is most important during the early “vegetative” stage of growth, during which time the plant is focusing on developing strong, healthy tissues and leaves. In the vegetative stage, plants need nitrogen to develop their roots, stems, and foliage.

It’s essentially a quick source of energy. It’s still important as the plant flowers and sets fruit or seeds, but needed in lower quantities than in the initial vegetative stage.

During the flowering and blooming stages, plants are moving away from developing lots of stems and leaves and instead are focusing their energy on flowers, fruits, and buds.

Too much nitrogen during this stage can seriously harm the development of your plants.

Different Sources Of Nitrogen For Plants

There are several ways that plants can access nitrogen. Three of the most common are ammonium, nitrate, and urea.

There are several ways that plants can access nitrogen, one of the most common being ammonium.

Ammonia is a gas at atmospheric pressure but can also be compressed to a liquid. When added to the soil, it can be converted into nitrate, which is more easily taken up by plants.

Ammonium nitrogen requires more oxygen in order to be metabolized in the plants’ roots, where it reacts with the sugars there.

Nitrate is a form of ammonia that dissolves in water and moves about in the soil as the water moves around.

Nitrate forms of nitrogen are the ones that most commonly leach from the soil, especially soils that are mostly clay.

Urea is the third form of nitrogen fertilizer. It has to undergo a three-step change before it can be used.

Enzymes in the soil must convert urea to ammonia, which then must react with soil water to form ammonium.

Which Form Of Nitrogen Is Best?

Each of these nitrogen fertilizers can be used on plants. However, you’ll want to consider the type of plant you are fertilizing and when you are doing so.

For planting in the spring, for example, ammonium sulfate and urea tend to be the best sources of nitrogen.

A nitrogen deficiency is one of the most common deficiencies found in plants. It initially affects the older, lower leaves, and they will begin to turn yellow in color.

Nitrogen is a mobile nutrient, wherein in can move around, and it is at this point that the plant is breaking down its last reserves in the old leaves, in order to transport it to the fresh, young leaves.

The nitrogen deficiency will progress up the plant and only the new growth at the top will appear to be green. The lower leaves will continue to turn yellow, wilt, and eventually die. Death of the leaves start at the tips and goes inward.

You may notice that new leaves are smaller in size, and overall growth of the plant is stunted. Plant cell tissue is made up largely of nitrogen, so overall growth of plants is affected quickly when a nitrogen deficiency is present.

Below, you can see a few examples of nitrogen deficiency. Notice how the middle of the leaf on the left still appears to be a dark green, as the deficiency moves inward.

On the right, you can see the deficiency across different stages. The top leaf is the most deficient, and you can see that the progression across the lower leaves.

How To Correct Nitrogen Deficiency

The best way to correct nitrogen deficiency in plants is to first ensure the deficiency isn't caused by a pH imbalance. A pH imbalance will block nutrient uptake through the plant’s roots.

It is important to regularly check the pH, and to be sure to keep the pH within the appropriate range for soil or hydroponics.

The optimal pH range for most plants is between 5.5 and 6.5. In this range, the nutrients present in the soil or water are soluble, and are easily taken up through the plant’s root system.

When the pH level is outside of this range, even when the proper nutrients are present, they are not able to reach the plant.

After that, consider whether you have a nutrient imbalance. Plant nutrients interact either synergistically or antagonistically. If you feed too much of one nutrient, you'll lock out others.

But, if you are following your feeding schedule properly, this shouldn't be an issue. Let's move onto some other reasons for nutrient deficiency, and explain how to correct them.

Are your garden pots or containers too small?

In soil growing, undersized containers for plants is a common mistake when growing indoors.

Plants in undersized containers will quickly use up all available nutrients and won’t thrive.

Transplanting plants can be done up until the third week of flowering.

Address the quality of your growing medium

Do not ever use topsoil. You don't know what its contents are nutrition wise, and it likely won't provide proper aeration or drainage.

Instead, check out our list of the best grow media of the year. Anything on there will rule out your soil as an issue.

Fertilizing and nutrient supplementation is very important when growing. Fertilizing on soil is necessary to boost plant growth, and a lot of plants tend to grow faster than their roots can gather natural nutrients in soil.

Many gardeners and growers like to have a ready-made supplement on hand to prevent or quickly remediate a nitrogen deficiency at the first signs.

All-in-one combined solutions give plants the added mineral and nutrition boost that they need, resulting in enhanced foliage growth and healthier and more productive fruits and blooms.

How Do I Know Which Plant Nutrients Are Nitrogen Rich?

The N-P-K numbers that are often displayed on the supplement will indicate the relative quantities of nitrogen, phosphorus, and potassium the product contains.

If you are searching for a nitrogen rich product, you will want the first number, or N number, to be larger than all the others. In the image above, the 12 represents the nitrogen number.

If you aren't sure be sure to consult the product MSDS sheet to find out what it contains or contact our helpful experts for recommendations and tips.

When plants take in a surplus of nitrogen, this leads to an issue known as nitrogen toxicity. Although your plants need nitrogen to be healthy, it is also quite easy to overfeed this nutrient.

Nitrogen toxicity is more common in hydroponic grows than in any other kind of growing. It can be just as damaging to your plants - if not more so - than nitrogen deficiency.

The signs of nitrogen toxicity vary depending on the plant. Usually, you’ll notice that your plants are extremely dark green.

Alternatively, the leaf tips might look burned or brown. Some may even turn yellow, particularly if they have access to plenty of nitrogen but not enough other nutrients.

When you’re evaluating your plants for nitrogen toxicity, it’s important that you rule out other issues first.

For example, you need to make sure you aren’t overwatering or underwatering your plants. This isn’t usually a concern of hydroponic growing, but is common in ground - or container-grown plants.

In a hydroponic grow, though, you should make sure your nutrient solution is being oxygenated well with air stones, and that your temperature and pH are within the normal range. You should also check the temperature.

Correcting Nitrogen Toxicity In Your Plants

f you’re able to rule out all of these issues, then there’s a good chance that nitrogen toxicity is to blame. Here’s how to fix it.

The most obvious piece of advice you’ll find when it comes to dealing with nitrogen toxicity is to stop giving your plants so much nitrogen.

Well, of course! However, treating the toxicity isn’t always as easy as simply removing the offending nutrient.

You also have to reverse the damage. First, check your solution and make sure all of your nutrients are within the normal ranges for the plant’s growth stage.

You can dilute with fresh water and calibrate your pH afterward, or you change out the reservoir completely with fresh nutrients and water.

If you’re in the flowering stage, it almost always makes more sense to just do a complete reservoir change.

Stop feeding nitrogen-heavy fertilizers (this includes both synthetic nitrogen fertilizers as well as fertilizer that are rich in nitrogen, like chicken manure).

If you aren’t fertilizing, your soil might just have an overabundance of nitrogen. Filter some water and pour it into the soil where the affected plants are growing.

This should help flush out some of the excess nitrogen in the soil.

Final Thoughts On Nitrogen for Plants

Nitrogen is found in plants more than any other element (with the exception of hydrogen, oxygen, and carbon).

It’s essential for so many vital plant functions - and it’s necessary for life.

Consider the role of nitrogen for plants in your garden, and know the signs of toxicity and deficiency so that you can be a wiser, more productive grower.

How To Grow Hydroponic Broccoli

How To Grow Hydroponic Cabbage

How To Grow Hydroponic Celery

How To Grow Hydroponic Grapes

How To Grow Hydroponic Carrots

Have questions about your grow? We're Here To Help!

Our Northern California based experts can help. We're here to make sure you get what you need to maximize your harvest.

or Email an expert