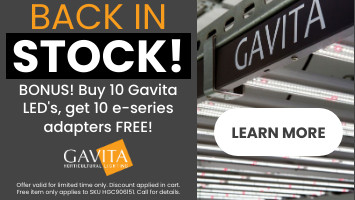 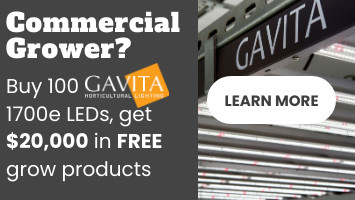 The Gavita Pro 1700e LED Gen 2 Grow Light is everything you'd expect from a Gavita LED. Until now, cutting energy costs and delivering maximum light output have been opposing priorities for growers. This fixture solves that. Say hello to the Gavita 1700e. Developed by the leaders in horticultural lighting, this LED is powerful enough to deliver the same high-performance growers rely on while reducing energy and lifetime ownership costs.

The "Pro" in Gavita Pro 1700e LED really shines through. This is an incredibly powerful grow light and can be used in just about any application: commercial warehouses (vertical or horizontal), greenhouses, and home grows (rooms or tents).

The Gavita Pro 1700e produces almost no heat. The open bar design passively cools the system. The fixture consists of 8 LED light bars, and this open design prevents heat build-up over the canopy. This allows you to place it closer to your canopy than other lights, cut down cooling costs, and maintain a perfect grow environment.

The 1700 µmol/s fixture results in an impressive efficiency of 2.6 µmol/s per wat

Much more efficient than a traditional HPS

This Gavita LED is a lower wattage than you may think with just a 646 watt power draw. It can repalce a 1000 Watt HPS without sacraficing any light or quality. It can also be dimmed up to 50% witht any loss in efficiency.

By switching to the Gavita 1700e grow light, you can reduce HVAC costs by 30 - 40% when compared to an MH/HPS grow light.

The Gavita Pro is already the most efficient LED on the market, and also one of the most powerful. It produces 1700 µmol s-1 PAR and pulls 646 watts from the wall. It works incredibly well in commercial grows and greenhouses and carries a manufacturer's warranty of 5 years.

From a compliance standpoint, no other LED on the market can even compete. It features an IP66 Wet rating and is UL8800 compliant for use in wet environments - making it perfect for commercial growing environments. It is also FCC compliant, and ETL certified.

The Gavita Pro LED is composed of Philips Drivers, Samsung white LEDs, and Osram deep-red LEDs. This light is built to last, and by far the best commercial LED grow light.

Note: This fixture has 4 different power cords to choose from (sold separately)

Choose your desired voltage of power cord from the options at the top. All Gavita 1700 Power Cords are 8 ft. in length.

While the Gavita 1650e LED was an incredible grow light, Gavita knew there was room for improvement. Seeking the very best in LED grow lighting, they improved upon this light with the 1700e.

In the gen 1 Gavita, the plexiglass around the light acted as a water catch, which would hold moisture or spills from above in racking systems. So, they removed this plexiglass. They also switched to the single fin vs a dual fin design, to eliminate an additional water catching point. This single fin is just as efficient, so you don't lose any power or performance.

The Gavita 1700e LED also brings new certifications to the table, such as an ETL listing, and a new IP66 rated housing which is completely enclosed. the communication connections are also IP rated, and the cables used are now RJ45 vs RJ 12/14.

There are also key differences in the adapter, as the first one was not ETL rated and the new one is. The mounting of the adapter is improved too, as the gen 2 adapter features hanging ears to make things easy. Furthermore, the "IN" and "OUT" communication ports have been moved to opposite ends of the fixture.

Another huge advantage is that cleaning the Gavita 1700e is easier than ever. You can literally spray down the fixture with a hose, as everything is completely sealed and safe.

Why Choose The Gavita 1700e LED Over The Competition?

We can make all sorts of claims about why the Gavita LED is so great, but how does it actually stack up against the competition? Let's compare it to the Fluence SPYDR 2i - the most similar competitor currently on the market.

In terms of LED diodes, the Gavita has 3264 white and 72 red diodes, compared to 2142 white and 84 red on the SPYDR. While both brands use the same, quality diodes, Gavita uses 49% more and doesn't drive the diodes nearly as hard. This maintains longer diode life with less color shifting, getting you further with your investment.

The Gavita 1700e LED is known for using the Philips Advance driver, whereas the SPYDR uses a cheaper, lesser-known driver. The extra money Gavita spends on these drivers shines through in their performance compared to the competition.

These two lights have very similar wattages, yet the Gavita produces a more efficient PAR Efficacy at 2.68 µmol/J compared to 2.56 µmol/J of the SPYDR. Furthermore, the 1700e produced an output of 1744 PPF, compared to just 1631 PPF on the SPYDR.

A few other advantages the Gavita 1700e has over the SPYDR is compatibility with popular Greenhouse Controllers, a high ambient temperature rating, and easy assembly and installation. If you were previously on the fence about which LED is right for you, hopefully, this helps you make your decision! 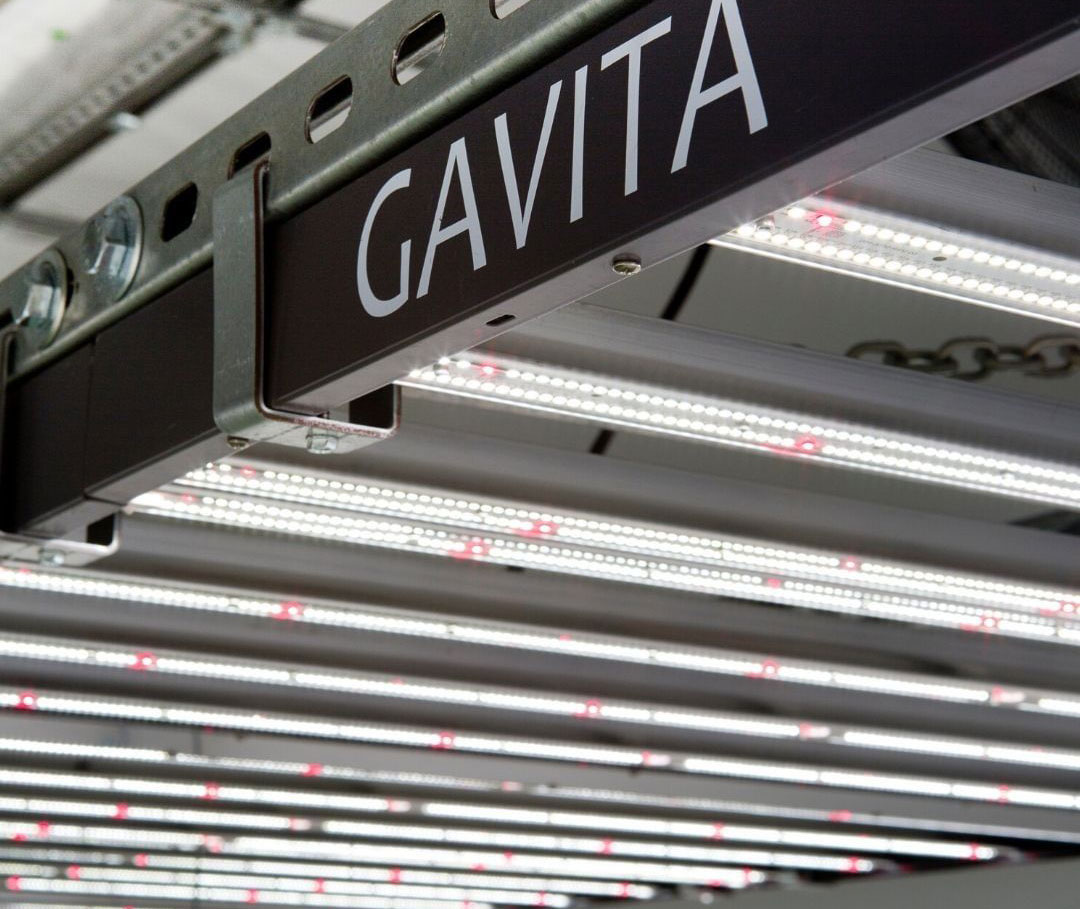 Optional: Supplement the 1700e with the Gavita UVR

The Gavita UVR LED 120-240V can be used as a stand-alone LED or to boost UV input when used with full-spectrum Gavita LED rail fixtures. The Gavita UVR LED is intended to be used primarily in greenhouses or in climate rooms.

The UV-A Supplemental LED fits directly into the chassis of the Gavita 1700e LED allowing for ease of installation and enhanced lighting. This light can be used in wet environments and performs optimally when the max ambient temperature is between 68~104° F / 20~40° C 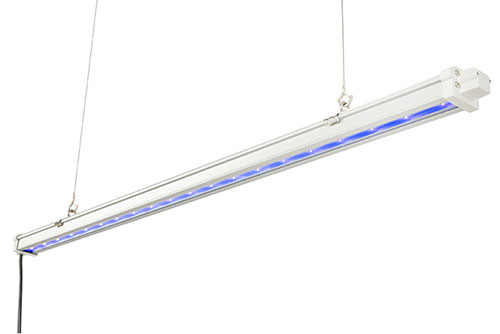 The Gavita UVR is available as an Add-on and can be found at the top of this page.

The Optimized Spectrum Of The Gavita Pro LED

Our combination of white and red LEDs results in a relatively high ratio of blue light. Blue light keeps your crop compact in the vegetative stage and adds to an optimal morphogenesis and light interception by the plant. It maintains the photosynthetic system of the plant to optimize its photosynthetic potential and can shorten your flowering period. Blue light also triggers stomatal opening during the light period.

The 8-bar configuration allows you to mount this light source in low rooms, on vertical racks, over rolling benches or even in tents. For maximum uniformity, hang the fixture 24-36 inches from the crop.

The spread of red LEDs in the array guarantees a uniformly mixed spectrum on your crop at short distance. A full spectrum increases the quality of your crop.

Rest assured knowing that your plants are all getting the attention they deserve from this beast of a grow light. Its the most efficient commercial grow light in the industry for a reason. 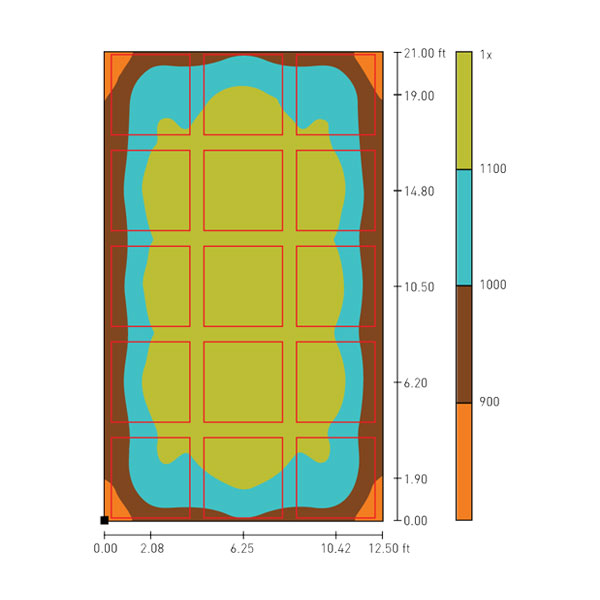 IP66 wet rated and UL8800 compliant for use in wet environments which allows versatile placement in growing spaces.

Its IP66 wet rating provides complete protection from dust, oil, and water, allowing you to mount this light source in low rooms, on vertical racks, over rolling benches or even in tents. 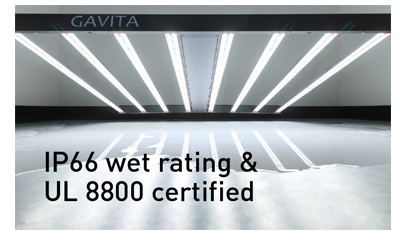 Operating at 645 watts with an output of 1700 µmol s-1, this fixture achieves an impressive efficacy of 2.6 µmol s-1 per watt. Eight passively cooled LED bars provide intense light coverage with no fans or moving parts—significantly reducing the number of possible fail points compared to other fixtures.

The high fixture efficiency of 2.6 μmol s-1 per Watt enables you to finally leap ahead in reducing your HVAC capacity by about 30-40% compared to regular open HPS/MH solutions. The high efficiency and low powered LED configuration with 8 LED bars reduce the temperature of the LEDs – increasing the output and improving their light maintenance. 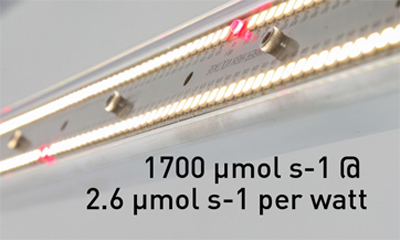 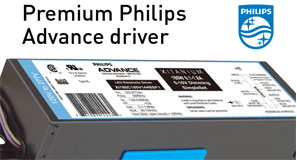 The Gavita Pro 1700e LED is dimmable and distributes broad, full-spectrum light anywhere from 50% to 100% while maintaining efficiency. Dim using the Gavita E-Series LED Adapter and Gavita EL Master Controller. The Gavita E-Series LED Adapter – 120-277 V (sold separately) is required for each fixture when using the controller; non-controlled fixtures simply operate at 100%. You can connect up to 500 – 1,000 LED fixtures, depending on the controller, using a setup with daisy-chained splitters.

The E-Series LED Adapter is designed to be used with the Gavita 1700e LED fixtures. This product runs inline with the power cord to the fixture. Using this device in conjunction with the LED fixture will allow you to control them with an EL series controller. These adapters utilize cables with RJ45 connectors for daisy chaining the control signal between adapters. Adapters are cETLus listed as well as IP66 rated for commercial use. 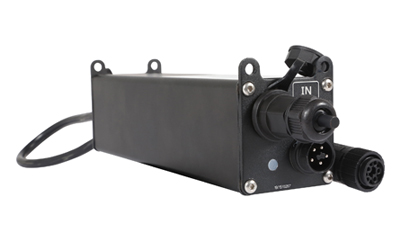 hands down the best
I can't even explain how much better my setup is with these over my older HPS setup. I am SO happy Gavita took their time to bring out a fantastic LED! Our yields and quality have gone up dramatically while lowering overhead costs

Review by fred001 on 11/19/2020
long wait, but worth it
the demand for this LED is insane, but it worth waiting in line to get it if you have the time. Other good options are out there, but I'm a Gavita fan from the days I grew with the DE's, but I just can't spend that on the electricity these days. The best LED on the market hands down.

Review by bob on 8/18/2020
Best service ever! Excellent products,
Ordered gorilla 5x5 package with gavita 1700e awesome set worth every penny, so happy 5 weeks in! The staff at hydro builders Is the best, yeah I could have purchased locally but went with hydro builders instead best price better service and superior products. You won’t be disappointed

Review by Bo on 6/7/2020
Make sure the power cord is on ur list
Absolutely love the light. It was recommended by a master grower I grew up with, I just got back into growing after a 5yr vacation. Plants love the light and responded well to full power when not having been subjected to that intense. I hung the light 5ft up as it is was really intense for my girls. 2 days later growth that was substantial. Left it at 5 for flower and yessir im getting the controller to dim and run my whole op with this. Super impressed! However to be honest i was very disappointed by having to buy my power cords. I thought i read there was a 6ft cord included. Im not a good reader but i thought i read that ppl were disappointed in the 6ft cord that came with it and had to upgrade to the 8ft. Again im not a good reader lol

Review by Gv530 on 5/15/2020
The light is perfect but the electric cord is bad
The only think is very bad is the cord the connection if you move the light up or down it will go off ease .Very delicate connection

Review by JC on 5/1/2020
Fantastic Light
I use these in three facilities. We lowered production cost and increased potency.

Review by Bwow on 1/28/2020
Best LED
If you have wanted to move to LED I think you should jump on it. This blows away my performance from the 1000w DE I had before. I made my money back after the first couple of runs. Highly recommended and quality is great

Review by B_B on 1/22/2020
Best light on the market
We have three facilities and this light increased production by 8% in each one!

Review by Bob Lars on 1/15/2020
Even Better Than The 1650e
I was wondering why the 1650e was already being discontinued, well its because they had an even better performing LED being tested and manufactured. This LED has blown my mind. I love it! My plant love it! I'm excited to expand my space so i can outfit it with more! I'm glad Gavita took their time coming out with a solid LED instead of just bringing one out years ago because all other top manufacturers were.