The ultimate handy solution for measuring conductivity (EC or ppm) and temperature!

Measuring the conductivity every day is the best way to avoid over-diluting or over-concentrating your nutrient solution. Completely change the reservoir solution every 7 days. Top up the nutrient level between changes - so your plants always have the right amount of food.

The Bluelab Conductivity Pen also measures the temperature of the solution, as root health is vital to the success of a crop. Temperature affects the growth rate and structure of a plant so a solution temperature of 18 - 22˚C or 65 - 72˚F is recommended.

To make sure the plants can get at the food, you need to measure the pH of the solution. Check out our handy Bluelab pH Pen so you have every tool required to manage your nutrient solution.

Conductivity (measured in ppm, EC, TDS, CF) is the total soluble salts contained within a liquid solution. Pure water does not contain salts, so it has a conductivity measurement of zero. By adding soluble elements to the water, electricity is able to move through the solution giving it a conductivity rating.

So why is it important? 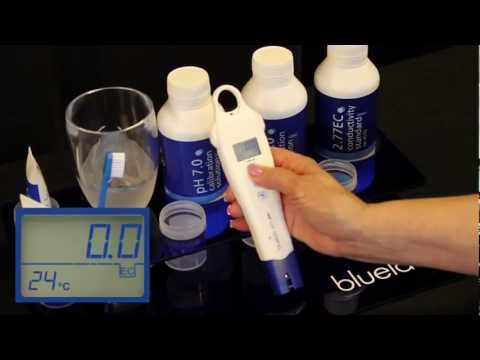 My nutrient readings are inaccurate - why?

What ppm scale should I use?

ppm is known as dimensionless quantities; that is, they are pure numbers with no associated units of measurement. A mass concentration of 2mg/kg - 2 parts per million - 2ppm - 2 x 10-6.

There are many different scales used for different industries around the world and for many different reasons! Did you even know there are more than two scales? The most widely used scales in Hydroponics are the 500 scale, 650 scale and the 700 scale.

CF and EC are measures of electrically charged nutrient ions in a solution.

Pure water will not conduct electricity. Water usually conducts electricity because it is full of impurities, in our case, electrically charged nutrient ions. The two black dots on the end of Bluelab nutrient probes are called electrodes. When these are placed in a solution, an electrical current passes from one electrode, through the water to the other electrode and counts the number of electrically charged ions present. This represents the units measured - CF or EC.

The ppm 700 scale is based on measuring the KCl or potassium chloride content of a solution. The ppm 500 is based on measuring the NaCl or sodium chloride content of a solution and is also referred to as TDS - total dissolved solids. Individual nutrient ions have different electrical effects! The true ppm of a solution can only be determined by a chemical analysis. ppm cannot be accurately measured by a CF or EC meter. They are present on Bluelab products as a conversion guide only. The conversion is as follows:

If you must grow using ppm, you will need to know the following:

calibrates with the solution
if it's reading on par remains to be seen. Review by blue lab / (Posted on 5/5/2017)
Bluelab is a must have
I have tried a few other brands (oakton, Hanna etc.) and have had them fail or just not read properly in some situations. I'd recommend to just go with bluelab from the start. Save yourself the hassle! Review by Teddy420 / (Posted on 1/5/2017)
Satisfied but not impressed...
I've always thought of blue lab products as quality (still do) but this ppm/ec pen doesn't read anything below 100ppm, so checking the ppm of your water isn't possible for whatever reason... when I purchased mine it stated it read from 0 to ???? but it doesn't read anything below 100 (as I said) and the last digit is always a 0.. say your solution is 1255ppm, it'll read 1260... Obviously 5ppm isn't the end of the world but when you wanna know what your reverse osmosis unit is putting out, this meter isn't gonna help you... Review by Whitey / (Posted on 11/3/2016)