No Emissions Air Sanitation System With The AiroClean420

Completely safe unlike some other air sanitation systems that propel potential hazardous gases or chemicals back into the room thus risking your valuable plants. Powdery mildew removal has been a difficult task for commercial growers and producers for a long time, until now!

Since 2015, our Commercial units have successfully been used throughout grow rooms in North America and now we are taking the same technology and created our home / hobby units. The Airo Home / Hobby Grow is specifically designed for smaller grow rooms and helping infestation prevention by destroying costly fungal diseases like Powdery Mildew, Gray Mold/Botrytis, Downy Mildew, etc with photocatalytic oxidation (PCO) that has zero emissions. Each Home and Hobby unit will cover up to 1,200 cubic feet (L x W x H) and for larger rooms, multiple units can be used. 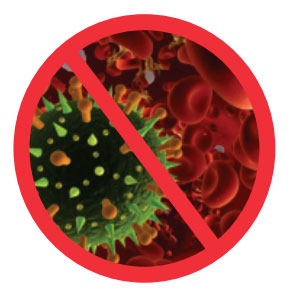 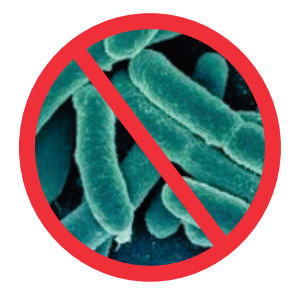 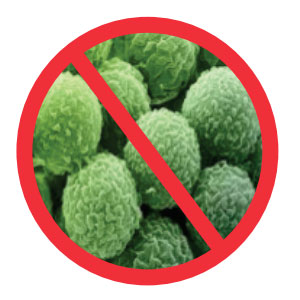 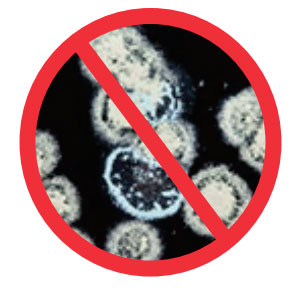 For many years, this made in America NASA Developed Air Sanitation Technology has been a significant Preventive Control in helping the Food & Beverage Industries protect their perishable products from costly and harmful contamination. Since then thousands of global companies, across a variety of agricultural markets, have shared positive performance feedback.

A few years ago, the AiroClean420 Air Sanitation system was first introduced into the Industry as a Chemical Free (No Ozone, Hydrogen-Peroxide, or any other type of Emissions) solution for stopping airborne Powdery Mildew and other Fungal Diseases.

AiroClean420 is a chemical-free, no ozone or other toxic gas Solution. Helps infestation prevention by destroying costly fungal diseases like Powdery Mildew, Gray Mold/Botrytis, Downy Mildew, and Blight with photocatalytic oxidation (PCO) that has zero emissions. AiroClean420 is a customer-proven Air Sanitation technology that is the new industry standard in airborne disease prevention and powdery mildew removal.

Powdery mildew, mold and other pathogens are present in even the smallest of grow spaces. Many growers rely on harsh chemicals and fungicides to keep their plants clean, but the best way to remove powdery mildew and airborne threats before they attack your plants is to eliminate them from the air itself.

Thousands of our AiroClean420 commercial growers have successfully stopped powdery mildew from wiping out their crops with our air purification system. We’ve taken this proven technology and scaled it down to benefit home growers and hobbyists. With no emissions, ozone or harsh chemicals, the Airo Home / Hobby air purification unit is an easy, affordable solution to growing clean, vibrant, fungus-free product.

For commercial growers, our AiroClean420 unit is tried and true when it comes to eliminating powdery mildew and keeping commercial growers compliant. Commercial air purification is important because airborne threats can spread quickly and devastate your product and profits.

Medical patients rely on growers to keep mold and mildew out of their products for health and safety. Organic providers can benefit from AiroClean420 air purification because it eliminates the need for harsh chemicals. Product grown for edibles must also stop the slightest signs of powdery mildew or mold for ingestion safety.

Powdery mildew and airborne threats thrive in closed grow facilities. In the last couple of years, we’ve helped thousands of growers remove airborne pathogens. Keeping their air and plants clean. Plus, free of emissions, ozone, and environmental worries. Your time and effort are valuable when cultivating high-quality product. We are here to support you and make growing easier. Size doesn’t matter to mold, but size does matter to stop powdery mildew effectively. 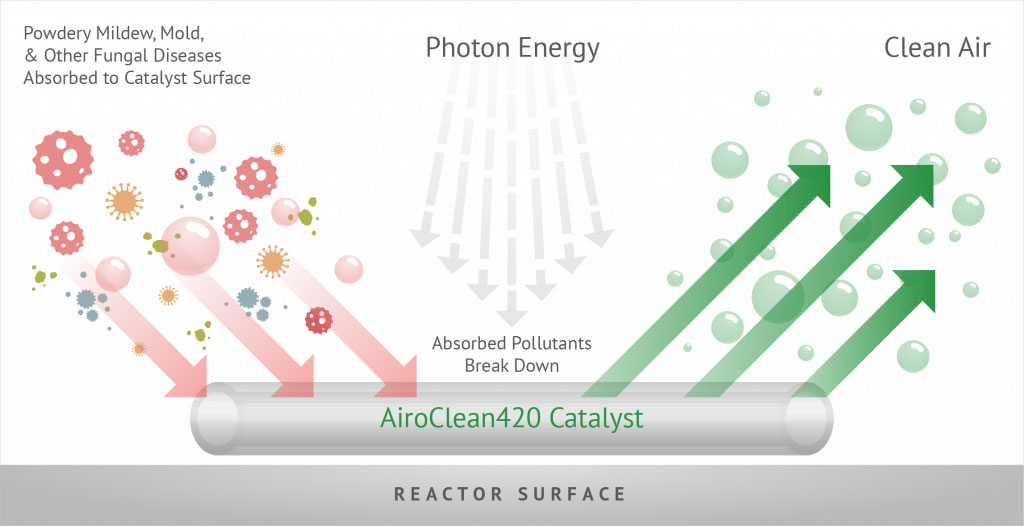 The AiroClean420 Air Sanitation System utilizes a patented Bio-Conversion reactor currently used in units around the world. As contaminated air enters the AiroClean420 system, it passes through thousands of rings contained within a sealed reaction chamber. These rings surround an array of proprietary high-intensity PCO lamps, which serve as the unit’s primary source of energy.

As the contaminated air passes over the lamps, they excite the catalyst and form millions of hydroxyl radicals that mineralize mold and fungi such as powdery mildew, pollen, viruses, bacteria, allergens, and VOC’s. Instead of being released as a harmful gas, they are transformed into harmless and green carbon dioxide and water vapor. The result is clean air distributed throughout your facility. There is no ozone produced. No peroxides or oxygen derivatives generated. Only AiroClean420 sanitized air.

Does AiroClean420 produce any Emissions?
No – there are no by-products (No Ozone, Hydro-Peroxides, or any other Emission) that are released from the bio-reactor.

How does AiroClean420 work?
The patented technology utilizes Photocatalytic oxidation (PCO) to destroy harmful airborne microbes. A NASA Developed photocatalyst (incorporating TiO2) is used in the AiroClean420 air sanitizing systems. When this material is irradiated with the photons, from the proprietary UV lights, hydroxyl radicals are formed, which oxidize (reduce to trace elements of carbon dioxide and water) fungal diseases such as Powdery Mildew, Downy Mildew, Gray Mold/Botrytis, Blight, Bacteria, Viruses, Odors, and VOC’s (Volatile Organic Compounds) adsorbed on the catalyst surface. AiroClean420 air sanitization systems produce no ozone and are not a filtering system.

How long has AiroClean420 been in commercial usage and what types of industries are utilizing AiroClean420 to improve and protect their Indoor Air Quality?
AiroClean420 first gained commercial acceptance within the Food and Beverage Industries during 2002. Since then thousands of units have been successfully placed in Perishable Cold Storage rooms, Food Processors, Wineries, Food Banks, Retail Supermarkets, Distribution Centers, Bakeries, Clean Rooms, Labs, Health Care, US Military, Residential Applications

Does the AiroClean420 system emit any light while turned on?
No – the unit does not emit any light. Additionally, the small On/Off Power Indicator light is a safe green glow.

What makes this Photocatalytic Oxidation technology different than others on the market?
Other attempts at using Titanium Dioxide (TiO2) coated materials that claim oxidation or pathogen destruction have proven ineffective because of slow oxidation efficiency. The intended catalysts in these cases are either not photocatalytically active and/or delaminate (or split into thin layers) easily. The patented AiroClean420 technology utilizes a nano particle science to make a titanium oxide membrane that is photocatalytically active, which also binds to the applied surface(s) without delaminating. Nanotechnology comprises technological developments on the nanometer scale, usually 0.1 to 100 nm, or ten thousand times smaller than the width of a human hair.

Is AiroClean420 Energy Efficient?
Yes, AiroClean420 was designed to be extremely energy efficient. In fact, our model uses less than 2 amps of power (at 110 volts).

What maintenance is required?
The only maintenance required is annual replacement of the proprietary UV lamps.

Where are the AiroClean420 Systems installed?
The systems should be suspended from the ceiling (same level as your lights) equal distance and in the center of the room.